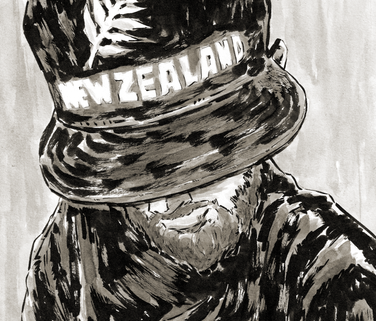 CitéNoir is a Berlin-based artist whose work thrives on the expressiveness of the (moving) picture. His creations range from illustration, animation and documentary film making to street art.

The collaborations with artists from all over the world resulted in several graphic novels based on spoken word poems and fiction, videoart for theatre, as well as in mural paintings in New Zealand.

Noir's handdrawn animated film Porcelain, for a song by Joe Madog has been screened in 2017-2018 on many fim festivals worldwide and has been awarded in the staff pick programme of the video portal vimeo.

In 2019 CitéNoir was the Artist in Residence in Wellington, New Zealand, a scholarship offered by the Goethe-Institut in co-operation with the Wellington City Council. In the three months he spent there, he worked with local artist on different projects, painting murals in Wellington and Porirua as well as illustrating a graphic novel anthology based on short stories by New Zealand writers.

He's currently working on several new projects and enjoys his life as an artist.